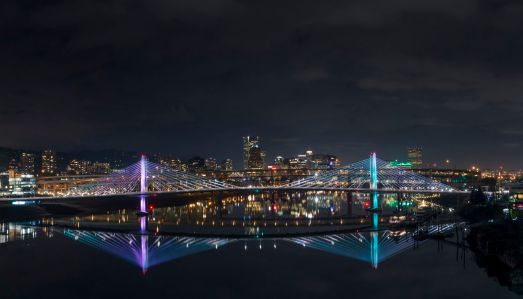 I got a lot of positive feedback last week for my Portland trip overview, and I thank you. It was a really fun, exciting adventure, and it was a pleasure to write about.

But that was just giving you a sense of what we did there–it was a look at Portland through a tourist’s eyes. Now, because this is a fashion blog, I want to apply a fashion lens to the experience.

So, starting with my flight/arrival look…

I don’t really like to fly, and I’ve never been interested in adding to the anxiety by trying to do “airport chic.” For me, it’s got to be comfortable. This was the closest I’ve ever come to going for a look. I went with all black, head to toe, including soft black shoes which you cannot see. Black stud earrings, my usual rings that I wear every day, and a little rose quartz necklace tucked into my shirt. I wore eyeliner, but that was basically useless, because my eyes watered, and it had mostly worn off by the time we landed. (Travel dehydrates your skin anyway, so I don’t believe in wearing makeup on a plane).

This was the longest trip Greg and I had ever taken, and I learned something: a neck pillow seriously makes all the difference. I borrowed one from my mom, and it truly made the flights 10x more comfortable. Obviously, I’ll have to buy one for myself sometime.

One stop I actually didn’t include in my last post was right after our first lunch. We had no clue yet how to navigate the city, and we just swung into the first place that said “coffee” as we walked back towards the hotel. I’ve actually had to look up what the shop was called, because we weren’t really paying attention, but it was Azar Indulgences. It turned out to be a small, Lebanese chocolate shop that also happened to offer coffee, as well as something called ‘sipping chocolate.’ The owner was very friendly, and she recommended that we try sipping chocolate with a shot of espresso.

I assumed it was going to be like hot chocolate, but no, this was bitter the way that very dark chocolate is bitter, and it certainly had an extra kick with the espresso. But sipping it slowly was enjoyable after a big meal, and we sat at the little bar by the window, people-watching. By then, with food and caffeine on my stomach, my head was much clearer (after the long trip), and that’s when I started noticing the fashion of Portland.

Most notably, an elderly lady who actually had a fall on the sidewalk right in front of us. I was just thinking as she passed by, what a personality she must have, with her big jewelry and little pigtails sticking up on top of her head, and then suddenly, down she went. (She tripped on a motorized scooter that was parked on the sidewalk). The good news is that several people stopped to help her, and after being stunned for a couple minutes, she was able to get up. She was coherent, and everything was okay. She sent away the ambulance that someone had called, and the chocolate shop owner brought her in and got her an ice pack. She sat down next to us, and we talked to her briefly–she did seem as eccentric as I’d assumed, but that’s very charming in an older woman. She spoke mostly, as she fixed her hair, of how indecent it is for ambulances to be so expensive (and therefore, mostly inaccessible), and thank goodness she didn’t need one.

It was a wild start to our adventure, that was for sure.

The hotel had actually upgraded our room (our stay seriously couldn’t have been nicer), and one of my favorite parts ended up being our bathroom. I mention this because just look at the lighting around that mirror! I had never had such an ideal place to put on makeup before. And that’s just what I did for dinner that night.

I had gotten this big, fluffy sweater for Christmas, as well as those huge earrings, and I packed them just in case, not knowing whether or not it would be cold enough to wear something so warm. It stayed in the 50s and was mostly sunny the whole time we were there, but the evenings were cold, so this was a perfect dinner ensemble.

And as you know, we dined at Jackrabbit, the hotel restaurant.

You can see this was an eventful trip, right from the very start. 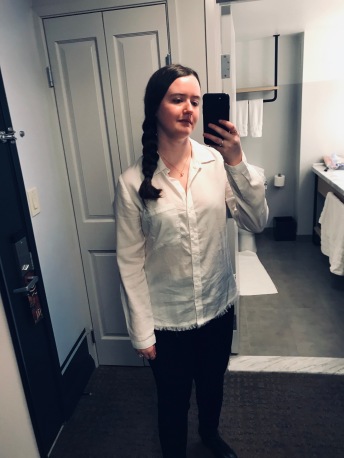 For our first official day, I went with the classic black and white. You can’t see it very well, but my necklace is a little golden bee pendant. I can’t fully explain why–maybe because this look has a sort of sultry business woman vibe?–but this outfit is Greg’s absolute favorite on me.

That was our big museum day, so I feel like it was the right style. 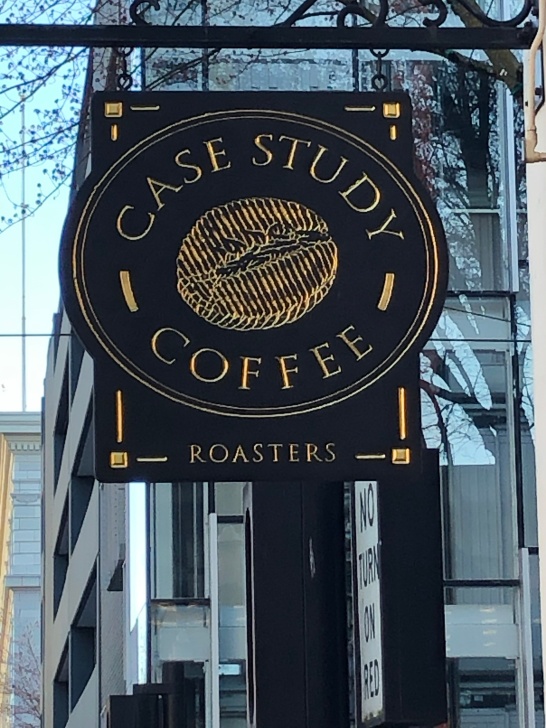 Our favorite coffee shop (in the overall vibe department) was Case Study, where we had breakfast. Everything was so ideal: it was all just starting; we were in high spirits. We got this perfect little table by the window, and we did some more people-watching as we ate. That’s really the great thing about large cities. Observing the multitudes of different people as they all go about their business–it’s exactly why there are so many outdoor cafés in places like Paris; people-watching is a well-loved pastime.

Portlandian style is actually not a simple thing to pin down. Eclectic is the best word for it. There really didn’t seem to be any rules, and I saw everything from haute couture to grunge…to just plain weird.

But that was refreshing, honestly. 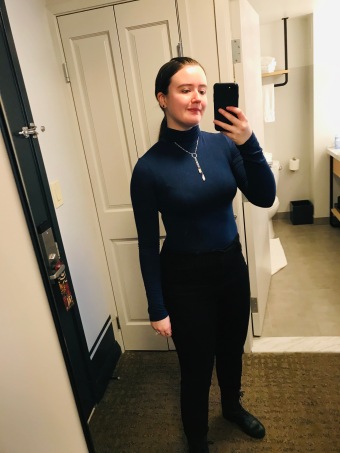 Since Portland is pretty famous for its weirdness, I brought along one of my more experimental outfits, and I wore it on the second day. A dark blue turtle neck tucked into my black pants, with my most unique crystal necklace as a statement piece. You can’t tell properly from this photo, but I’m wearing a navy blue stud in one ear, and a silver dangly earring in the other. I think I might have turned a few heads in this ensemble, but in a good way. I felt good anyhow.

I kept my makeup to a minimum during the day. Eyeliner and maybe a touch of lipstick. It just didn’t make sense to walk up and down the city every afternoon with a full face.

This was our bookstore and sushi day. Definitely our most extensive walk-through of downtown.

One aspect of the fashion I can certainly pin down for you is that tons of people had tattoos. Big, lovely, noticeable tattoos. And I don’t just mean hipsters and dive bar waitresses. Lots of professionals, too. Management position types. Clearly, the stigma against tattoos has faded significantly in that region.

And that could be said for more than just body art. Portland was, in many ways, a land of flamboyance. There was this sense of freedom in the air that was noticeable to us immediately–there was just more color, more expression. It made me realize how really, truly stifled we still are in the south. The people who live where I live aren’t less artful–there’s just a lot less tolerance.

On our last full day, I went with my bicycle sweater. This was also the day when at least two different people asked if I was from Portland, so I must have really nailed it with this look.

And it was this day when I properly noticed how much the city was “shrinking.” When we walked down a few blocks to get Blue Star donuts for breakfast, I was so surprised by how short a distance it was. The previous day, when we had walked the same distance, it had felt much, much longer. And in a way, that happened every day we were there. As we got our bearings and figured out where we were going, the city seemed to compress, becoming less daunting with every new morning.

That was more or less what we considered to be our shopping day, and we spent most of the afternoon exploring a different part of the city that we drove to. We walked the length of Mississippi Ave., which had actually been recommended to us by the owner of Azar Indulgences on our very first day. And I’m so glad, because otherwise we wouldn’t have known to check it out, and we might have missed the taxidermy shop and the delicious street food.

I won’t lie, I actually felt quite underdressed in this sweater when we went to the fancy steakhouse for dinner that night, but some makeup helped me feel polished enough to be passable. It’s amazing what the right eyeshadow can do. 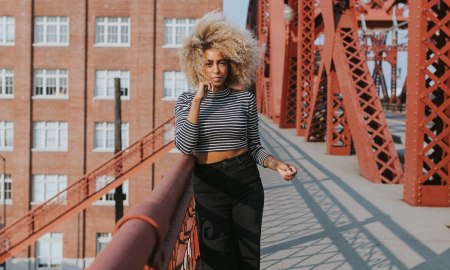 One more distinct detail I observed was the prevalence of crop tops, as well as outfits with cut-outs or plunging necklines. I’ve said before how much I love looks that show more skin, and I’ve even warmed up to wearing crop tops myself. So this was an element that I definitely enjoyed.

People told us on multiple occasions that we timed our trip perfectly. It was ideal walking-around weather, and that’s not usually how it is in Portland (we were originally expecting a lot more rain). So I’m sure that’s why many people had their springtime ensembles on.

I decided to go with all the same elements as our arrival for our departure: a novelty T-shirt with a long-sleeved shirt underneath (white this time). Same comfortable shoes, same accessories. Still all about comfort, but I was trying to look a little bit cool.

Trips like this inspire me to pull myself together, to bring my best–it becomes all too easy to pretend I’m a model traveling to go to Fashion Week, or (perhaps closer to the truth) a style journalist investigating this season’s trends. It’s an awfully fun fantasy to play out, even if I don’t really like to fly. And I’ve always had the sense that if you’re going to a new place, you should be a good representation of where you come from.

Just about the best feeling I get from any vacation is coming home at the end, and with that being said…it was a little hard to leave this one behind.

It only took about a day of being there before I told Greg that if we ever felt like we needed to move to a big city, I wanted it to be Portland. Such a move is never going to be realistic for us–we’re both too deeply rooted in our home; I’m already too happy where I’m at–but I’d never fallen in love with a city the way I did with that one. Everyone was so friendly and helpful. Everything was so interesting and artsy. There was an endless variety of people, things to do, sights to see.

And, quite frankly, it felt like a place where my gay and trans friends would feel a lot safer.

I’ve learned that fashion and self-expression go hand in hand. One is merely the reflection of the other. Portland was a strange and happy place. Eclectic and diverse. People dressed in a limitless array of unique, unpredictable ways. You could never be bored there.

Greg and I very much look forward to going back. 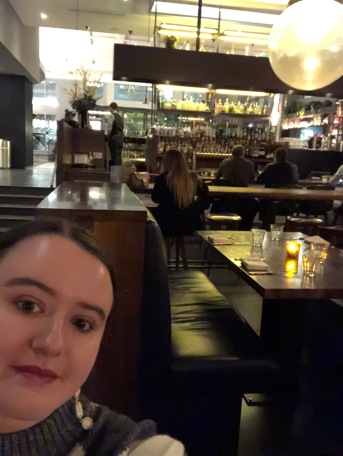 One thought on “La Mode Portlandian”