As you might expect, the annual Academy Awards event is the place for celebrities (and designers) to bring their A-game. They’ve all spent the last year working hard on the art they’ve dedicated their lives to. Obviously, when they receive recognition for it, they want to turn heads.

Billy Porter achieved that. To a point where I have to include him in this post. No one has ever turned my head quite like that. Bravo, Billy Porter. I didn’t know your name before this year’s Oscars. I know it now.

Okay, on to my official line-up!

This list isn’t going to appear in any particular order. I don’t have any ranking system. However, Amandla just might be my favorite look of the night. She certainly wins favorite hair. I loved every last detail. That dress was poetry with every move she made. Perfectly accessorized. And I am a huge fan of the recent movement for natural hair. African hair can be styled in such incredibly elaborate ways.

I’ll admit I might be so in love because her style is reminiscent of the 1920s, and I’ve adored that kind of fashion for a long time.

I don’t know if she did it intentionally, but Constance was channeling Princess Belle on the red carpet, and I’m all about that. I also appreciate that she was going for a vibrant, Chinese look in honor of her movie, Crazy Rich Asians. I really loved that movie; she was perfect for the lead role, and she absolutely owned it on Oscars night.

A young lady in a beautiful, well-tailored suit? What’s not to love? I personally think I would go for a dress if I ever attended the Oscars, just because there would be no finer dress on earth than an Oscars dress. However, the growing trend of women wearing suits is awesome. And I can’t deny, it would be very tempting to wear one if I knew I was going to look as chic as Elsie did.

What a classic, perfectly styled ensemble. Everything is superb, from the colors to the way it’s fitted. And I cannot express how much I love capes. The cape is what makes this worthy of the red carpet. I can’t find a single thing wrong with this look. Melissa rocked it.

Bonus: Her red fingernails were a nice touch.

Helen is a goddess. She is the absolute ideal for aging gracefully, and I hope I do it as well as she has. Her Oscars look this year was exquisite. Flowing and pink, just the right sort of style and fit, and accessorized to a T. The lighting actually made her dress look quite red as I was watching, but that didn’t make her look any less stunning.

Another woman in a great suit! I will say that I’m not a fan of the kind of pant legs that go straight down to the floor like that. They make it look like she doesn’t have any feet. But that being said, Amy caught my attention on the red carpet. Her suit even had coattails! I would definitely nominate this as her best Oscars look yet.

I think Letitia was the best dressed of the Black Panther cast at the Oscars this year. Not only was her dress perfection itself, but it couldn’t have been better accessorized. Notice how she’s wearing matching bracelets and rings on each hand. Very minimalist and chic. And I love hair decoration. Hers was pure elegance. She’s so beautiful, and I happen to be a big fan of the designer she was wearing.

Leslie almost didn’t make this list, but it was ultimately her accessories that got her in. As I said, I’m a big fan of the 20s aesthetic, and not only does her dress fall into that realm, her necklaces seal the deal. A long string of beads down the front, and a matching necklace hanging down her back. Such a Great Gatsby look. She gets a thumbs up from me.

Another Crazy Rich Asians superstar, Michelle showed up on the red carpet like she was living a fairy tale. Her dress was so romantic, and the look was pulled together perfectly by that big statement bracelet. Accessories can really make or break a look, and by now I’m sure you’ve noticed my pattern for choosing people for this list. Every element needs to work.

After all, it is the Oscars.

I nearly wrote this one off as too simple, but the more I looked, the more I liked it. It is simple, yes, but it’s not boring. The ruching at her hip, the way it flows out into a train, everything fits elegantly and looks lovely on her. And a white dress contrasts beautifully against a darker complexion.

There’s nothing about this style that I can find fault with. 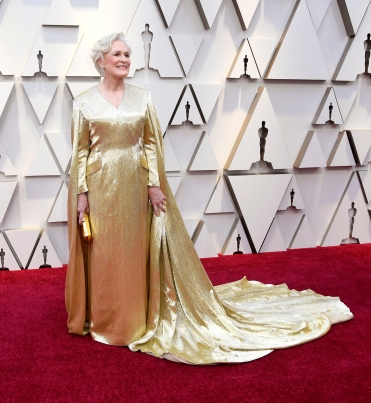 The woman who shows up in the golden cape is going to make this list, obviously. This is just the sort of look I want to emulate when I’m an older lady. A vision of elegance and grace, Glenn dresses like the Hollywood royalty that she is. If anyone walked the red carpet like a queen that night, it was her.

Fun fact: Glenn’s ensemble was the heaviest at the event, weighing in at 42 lbs!

What I love about this kind of dress is its unique shine. It’s actually sort of reflective, so even though it’s entirely silver, it takes on some of the surrounding colors. On the red carpet, the dress becomes rosy in some places, while catching the light in others.

When I saw her, I was immediately reminded of Taylor Swift’s look at the 2018 American Music Awards. Another disco-ball-esque ensemble that really caught my eye.

Look at how it catches the red of the carpet. What an effect. Jennifer’s style at the Oscars was sort of a mature version of this, just as it should have been. 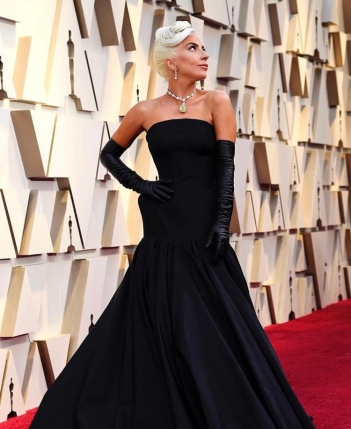 I feel like Lady has been trying to channel Old Hollywood lately, and it’s been stunning. She actually wore two dresses, and I’d like to make mention of them both. There was the above gown, which she wore on the red carpet, and then she wore the dress below for her performance and subsequent Oscar win.

Between the two, I personally prefer the latter. And her magnificent necklace is worth talking about also. The 128-carat piece featuring a tremendous yellow diamond was last worn by Audrey Hepburn, when the late actress was promoting Breakfast at Tiffany’s. Old Hollywood, indeed.

I wasn’t going to include male celebrities in this originally, but then they just kept showing up…fabulously.

Terry Crews makes the list because of the unexpected new accessory for men: the harness. He is actually wearing his own label, and the leather harness is crocodile. And honestly? I love it. I dig the harness. I am in favor of the trend.

Seeing this massive Hawaiian manly-man walk the red carpet in a pink velvet suit was like seeing toxic masculinity dissolve before my eyes. In a word, glorious.

Better still, he was so excited to have had a suit made for him. This was his first. I saw him on Instagram days later wearing the suit jacket out while getting lunch with his friends. He said he’d wear it until it wore out.

Fun fact: Apparently the suit was designed around his scrunchy, which you can see he’s wearing on his wrist in the picture.

Though the competition was stiff, this was the look of the night for me. On a man, anyway. Nicholas walked the red carpet in all black–which I find very sexy anyway–but the shape of his suit is what ultimately got me. I’ve never seen anything quite like it. How would you even describe it? Asymmetrical…double-breasted?

I’m not a film buff, but I love movies, I love actors, and I love the Oscars. It’s always a thrill to see all the celebrities I adore together in one place, interacting and just being themselves. And since I’m more familiar with designers these days, I get the added pleasure of seeing how they choose to dress the performers.

If you watched, I hope you enjoyed. If you didn’t, at least you have this glimpse into how it all looked.

This was my Oscars ensemble, by the way. (I know you were curious).